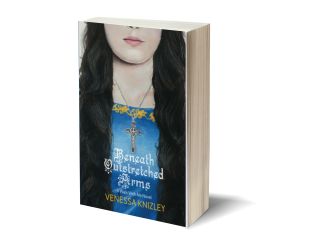 I have to be honest… The transition from cover 1 to cover 2 was bitter-sweet for me. I mean, cover 1 was my creation. At least, the crayon version was 😉 It’s what I submitted to a friend (and truly talented artist), who absolutely transformed it into something beautiful. 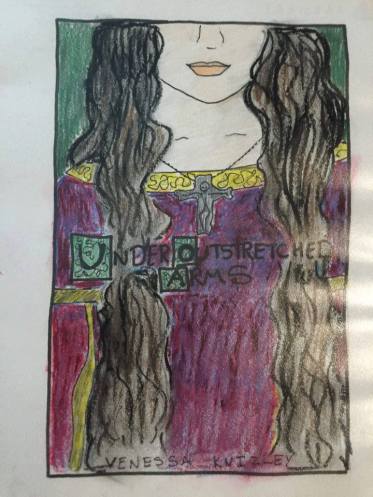 She first sent it back to me as a photo shopped hodgepodge of what she would draw… I remember the moment I saw this.  I knew it was Velena. She’d come alive, and there’s a lot of sentimentality involved in that.  I would have been very content to keep the cover as it was, but I was starting to find there was a problem with it.

Friends would tell me that they were buying it for their twelve-year-old daughter. What?! No! It’s not for children, why would they think that? Well, go to the library, and you’ll see. Almost all YA (young adult) fiction has a drawn cover. Adult romance novels do not…by in large. There are always exceptions. Mind for instance, haha.

So, I did my research and finally concluded that I wasn’t getting the traffic I ought to for my genre with the cover the way it was. With a heavy heart I went back to the drawing board…which didn’t involve any drawing at all, as it so happened. I contacted my publisher at Selah Press and we discussed what we could do. I was connected with a new cover designer…a wonderful Christian woman on the east coast, who absolutely transformed my book into something new and stunning. This is the “sweet” part of the bitter, and I’m so thankful for all that she did.

My prayer is that this gains me the traffic my book needs. Of course, I’m still keeping a few copies of the old around. Can’t get rid of those 😉 The plan, now, is to save up for cover 3 (still yet to be published, but you know…it has to have one) and then work my way back to re-covering 2 to have a matching set.  If you could see me, I just stopped typing to clap my hands because, yes, I’m just that excited 🙂

Now, as to the inside edits…

That’s a different story. I’ll be brief and say that I stink at homophones. If you ask me the correct spelling of a word, I could tell you…but while I’m writing, I butcher them ALL the time. It’s entirely possible you may even find one in this post (I almost made “It’s,” “its” just for fun). It’s a fact that my readers were leaving comments about them in their REVIEWS. One girl even left me the word and page numbers in her comments on Goodreads! But, thank you, whoever you are because I totally looked them up.

This was the biggest change made. The other was a revamp of the first paragraph in the prologue. I’d created this huge, ridiculous run-on sentence that absolutely drove me crazy every time I read it. So, changing that gave me an even huger (not a word, yes I know, haha) smile. Also, I added a family tree, which I hope will be helpful to everyone.

Second biggest change…though perhaps kind of the biggest reason for the changes in the first place was my use of a few off-colored words, such as b*stard and *ss…or is it a*s. Basically, a donkey’s hiney, not to be confused with a hinny. If you look that up and learn something new, you’re welcome.

Aside from not knowing where to put the asterisks in swear words, I don’t even use them (sometimes in my head because I have five kids and I haven’t received my sanctified body yet…but mostly, no). Still, though there are certain swear words I never ever say…and hate. And then there are others that don’t really bother me, and seemed to fit with what I was going for in the time period, so I used them. In my defense, it was actually Stuart who used them (the non-Christian antagonist). He was a bad guy who used bad words. Again, not so bad to me, but evidently really bad in England. “Bl**dy” and “B*gg*r” were fine in Robin Hood Prince of Thieves, so they had to be alright in a medieval book, right?

I did a lot of research for my time period, but never-the-less, my audience is Christian. I’m a Christian! And Christians generally don’t like to read bad words…especially British Christians who find them even more offensive than Americans do. To them, “Bl**dy” is like the f-word. That is an absolute no-go for me. In fact, I put down a book the first time I read it in one. So, I really shouldn’t have been surprised that my readers might do the same of mine.

So, I toyed around with going back into books I and II to change the offending words. This was humbling for me. I drug my feet a bit. That’s humbling to say also. It’s not that I especially wanted to use “bl**dy” in my book, but gosh darn it, that’s what my character wanted to say (Even the beloved, Janette Oke used “Dad-blammit” in Love Comes Softly), and I heard it as clear as day in  my head…I saw it play out like a movie. We writers are a bit weird like that, I know. So, the Lord had to do a bit to break down my resistance to making the necessary changes, but He was gentle about it.

He used a commenter on the Avid Book Readers FB page to finally got through to me. She said something along the lines of, “if it keeps people from hearing your message, then it’s not worth it.” Romans 6 played out. 🙂 Changing the books was the loving thing to do. When I realized that, it was easy to do. I never wanted to be the poster child for swearing in Christian fiction anyway. No, thank you.

So, you will no longer find any such words in books I or II…or III or IV when they’re done being written. I’m so thankful we serve such a kind and loving God, who uses all sort of things, by any and all means, to deepen the convictions and faith of His children.

I’ve been blessed through this process, and I hope you are too. Happy reading!

3 thoughts on “Changes to Beneath Outstretched Arms”